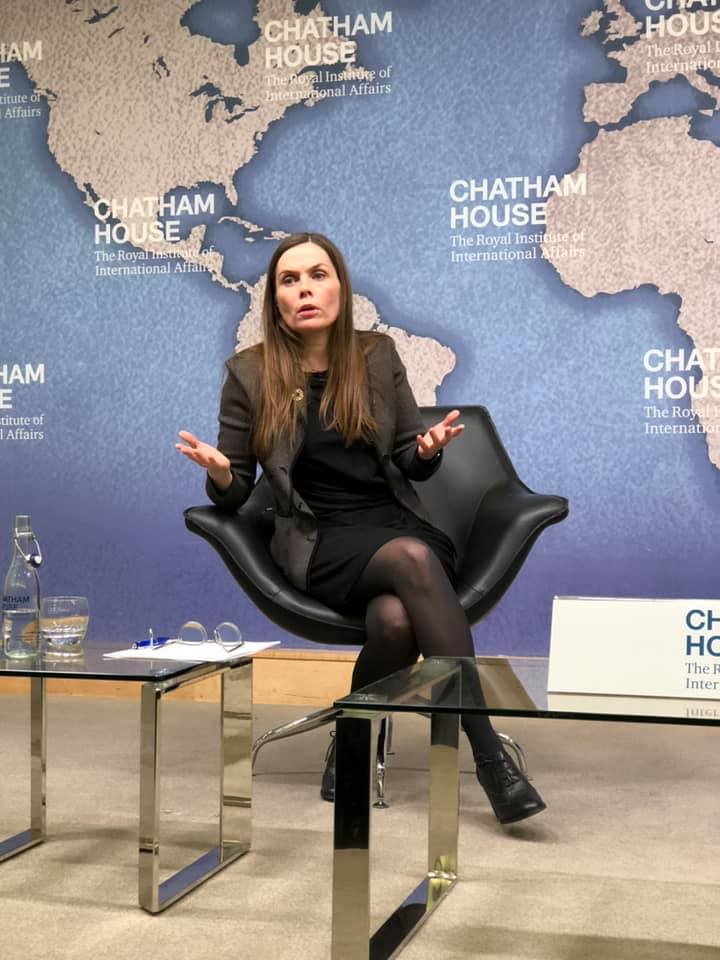 Iceland and the Wellbeing Economy

It is an honour to be here. Thank you for the kind invitation.

Last August, I went on a remarkable journey.

Together with Mary Robinson, former President of Ireland, and a group of artists, scientists and climate activists, I hiked up the mountain Ok in Western Iceland. Surrounded by patchy snowfields, the small crater lake on the top of the mountain is astonishingly beautiful. But that beauty quickly fades in the eyes of anyone who knows what was there before and why it is no longer there. The group was there to bid farewell to Ok glacier, which is no longer a glacier, a visible testimony of the irreversible impact of climate change.

Surely, glaciers in Iceland have advanced and retreated throughout the centuries. Natural fluctuations in temperature are a known fact, but the current development is a different story; it’s a direct result of human behaviour. Dismissing the rate of climate change as just another natural fluctuationis not only wrong, but also dangerous. It ignores scientific warnings by downplaying the historically recent, but massive, impact humans have on the climate.

The concern over the disappearance of Ok is not rooted in an urge to an everlasting natural status quo. But Ok, and other Icelandic glaciers, serve as visual thermometers, a local manifestation of a global issue that will bring enormous changes to human habitats and livelihoods. Most of the earth’s nearly 200,000 glaciers may soon belong to history books, disrupting water supply for large part of human kind and resulting in sea-level rise that threatens coastal communities across the world. The melting of glaciers is just one part of the picture. Climate change brings not only one catastrophe, but many, and the fact that we live on one planet, means that none of us can avoid the consequences, even if they will hit us unevenly, at least to begin with.

The Paris Agreement provides the framework and the shared goals, but more is needed than what was accomplished with the initial pledges. There is no alternative to transnational solidarity and no justification for continuing to pursue self-serving and narrow-minded national interests in the face of the climate crisis.

Action for climate protection cannot be guided solely by green remedies or by individualised policies; it has to take into account social considerations, as was learned from the gilets jaunes movement in France and similar unrests in other parts of the world. The poor are more likely to be displaced due to climate change; they are also more likely to be hit harder with inconsistent or contradictory climate change policies, and poverty is both racialised and gendered. This speaks to the need for social and economic reforms, as well as – and as a part of – targeted action to halt climate change.

This is the most challenging task of today’s politics and brings to the forefront the urgency of transformative ideas. It has prompted calls on both sides of the Atlantic for a Green New Deal, seeking inspiration from Franklin Roosevelt’s 1930’s New Deal and from social projects in Europe in the wake of the Great Depression and after World War II. This includes the NHS, social housing in France and the Nordic welfare models, all of which were big and bold ideas, designed to serve the common good.

Todays, politicians cannot necessarily count on the political appetite for transformative programmes to counter the climate crisis. Climate change denialism – as a political strategy – has been taken up by some populist right-wing parties in Europe, with considerable success. Simultaneously, international and multilateral collaboration is being undermined locally and globally. This trend is not only a key obstacle to targeted action against climate change; it also poses a threat to universal human rights, in which women and minorities are first in the firing line. Women’s bodies are being re-politicised in countries where that debate should have been over decades ago and previous victories on women’s reproductive freedom are under threat. Racism and xenophobia are on the rise and hate speech against minorities has been justified on the premise that “everyone should be entitled to their opinion”.

Mindful of the history and the legacy of Chatham House, I wanted to highlight this international development, which is by some seen as a reaction to unfettered financial globalisation, by others as the general weakening of liberal democracy, and by yet others as something entirely different. Discussions of root causes may prompt disagreements, and surely, they are many and diverse. But such disagreements cannot serve as an alibi from taking action to counter this development.

Globalisation has brought wealth to some areas – and to some people – but taken it away from others. The same pattern is evident with the incorporation of new technologies. As the so-called 4th industrial revolutions transforms jobs, education, and life, it cannot be left to the populists to bring hope to those who are – or feel – left behind. This speaks to the need to restructure the economy, not only to tackle climate change, but also to address inequality.

Fifty years have elapsed since Robert Kennedy made the point that GDP measures everything except that which makes life worthwhile. Economics is still centred on the measurable and quantifiable. Growth is considered not only essential but also positive – no matter how it is achieved and at what costs. Despite the considerable and well documented shortcomings of the GDP-centred approach, this is still the main barometer of economic and societal success.

My government has joined a group of countries – within the Wellbeing Economy Governments project – that seek to move away from such reductionist thinking. Among them are Scotland and New-Zealand, and we hope these small countries can help form new economic thinking for the 21st century, within the context of the United Nations’ Sustainable Development Goals.

The project entails not only an analysis of the drawbacks of the existing economic model, but also a commitment to building an alternative future, focusing on the wellbeing of current and future generations. The network is committed to shaping a vision for enhancing well-being and inclusive growth. One of the main goals is to ensure that economic policy supports collective wellbeing; that is, how happy and healthy a population is, not just how wealthy a population is, approaching quality of life not from a monetary measure (GDP) but from a wellbeing perspective.

Iceland is doing well when judged by classical measurements for economic and social performance, even if the economy is predicted to contract by 0.2% this year before returning to growth next year. With an annual average growth of more than 4% from 2012 to 2018, unemployment is currently under 4%. Iceland has the highest male employment rate in the world. The female employment rate is higher than the employment rate of men in other OECD countries, owing to progressive childcare and parental leave policies. But while income inequality is lower in Iceland than in any other OECD country, poverty has not been eliminated. The 2008 banking collapse strained the welfare system and the surge in house prices has brought difficulties to many families, especially of lower incomes. There are challenges to be met in the Icelandic education system which holds the key to the well-being of future generations.

My government is currently working on numerous projects that in the long term will ensure greater wellbeing in Iceland. It is investing significantly in social infrastructure – health care, welfare and education. An ambitious action plan is being implemented to respond to climate change, heading for carbon-neutrality at latest by 2040. The strategy consists of 34 initiatives, ranging from a carbon tax to food security, from wetland recovery projects to a government fund to support climate-friendly technologies and innovation.

While Iceland has adopted renewable energy for electricity and heating, it still lags behind on clean energy for transport. Thus, it has been decided to ban the registrations of new vehicles that are driven by non-renewables by 2030. Effectively, this will lead to the end of imported gasoline and diesel cars in Iceland.

My government has developed 39 indicators to track the progress of the wellbeing economy project. The indicators include economic, environmental and social factors and are compatible to other wellbeing indictors published in other countries and by international organisations such as Eurostat and OECD. A wellbeing budget is in the works (as New Zealand has embarked on), utilising the expertise from gender budgeting, which Iceland adopted first in 2010.

The starting point is building wellbeing into the next five-year fiscal policy statement, to be published next spring. A number of priorities have been identified and each category offers measurable indicators. This includes the reduction carbon emissions (very quantifiable!) and mental health. Even if Icelanders – as the other Nordic countries – rank amongst the happiest people in the world (e.g. according to the World Happiness Report), public health authorities have expressed concerns over the frequency of depression. Icelanders use more antidepressants than the neighbouring countries and major depression is more common. By adopting robust strategies to improve mental wellbeing, the aim is to reduce the rates of depression and hopefully decrease the reliance on antidepressants. This involves improving accessible mental health services and strengthening prevention, including through sports and arts. Other wellbeing goals, such as secure housing and better work-life balance further support this aim.

The wellbeing economy project demands new thinking; it consists of many of the same key ingredients that are manifested in proposals on green new deals on both sides of the Atlantic. This means redefining priorities and values and aim for the delicate balance of economy, society and environment, the core of sustainable development.

Now, before I conclude: I noticed that in the event description it is mentioned that I would share some of my political and personal motivations for embarking on the wellbeing economy project. I doubt any of you attended specifically to hear such stories, but I still feel obliged to reflect on it.

I grew up under the nuclear threat. As many children of that time, I became obsessed by the possibility of a nuclear war, but also by the nuclear winter that could follow. It wasn’t only the concept of the bomb or the war that was terrifying; it was also the devastation and the environmental degradation we might suffer in the future.

The solution to the nuclear threat was disarmament, the non-proliferation of nuclear weapons, and more importantly, pacifism, which was my entry into politics. It wasn’t until much later that I realised that devastation and environmental degradation could be brought upon the planet without wars. And today, we are faced with that reality, more blatantly than ever before.

But I also grew up in a block of flats in Reykjavík where I learned to love different people and learned everything I needed to know about diplomacy. And looking back to that time I think it´s important to note that the world is changing pretty fast. The world of our grand-parents is not the same as ours and my grand-children will encounter a different world and different challenges. Now, for us politicians, where eternity is marked by an election term (which in some countries can be very short!) – it is still healthy to imagine being held to account by our grand-children or even their children. And if they ask: why didn’t you save the planet? I do not want to respond: because we rather decided to save capitalism as we knew it.

The wellbeing economy project is an attempt to do the right thing in challenging times. I am strongly committed to it and I believe that this network can deliver key ingredients to the development of the green new deal concepts, in Europe and beyond.